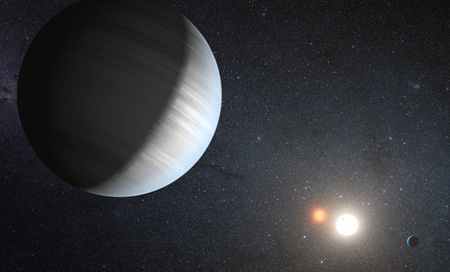 Artist's interpretation of the Kepler-47 binary star system and the two planets that have been found orbiting around it.

Kepler-47 is a remote eclipsing binary star system around which has been found two planets.

Kepler-47 lies about 5,000 light-years away in the constellation Cygnus. It consists of two stars, very close together, which circle around each other every 7.5 days. One of the stars resembles the Sun, while the other other is only about a third the size of its companion and 175 times fainter.

Observations by NASA's Kepler spacecraft have revealed the presence of two planets. The inner planet, Kepler-47b, is about three times larger than the Earth and takes 49 days to complete an orbit; the outer planet, Kepler-47c, is just a bit bigger than Uranus, and has a "year" lasting 303 days. Although the path of the outer planet places it in the habitable zone of its star system, its size suggests that it is a gas giant and thus itself probably unsuitable for life as we know it. However, any large moons around Kepler-47c may off thee possibility of habitable environments.

Although other planets have been found around binary stars, this is the first known instance of two planets in orbit around a binary and adds to the evidence that not only can planets exist in stable orbits in such a situation but that the presence of life, too, is not out of the question. [1]