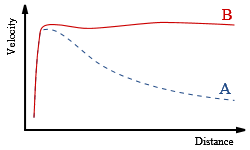 The predicted rotation curve for a spiral galaxy in which the mass distribution is the same as that observed for the visible mass alone (A) shown together with a typical measured rotation curve (B). The discrepancy points to the presence of large amounts of dark matter in an massive, invisible halo outside the bright spiral.

A Keplerian rotation curve is a plot of rotation speed versus distance from the center of an astronomical system that obey's Kepler's laws. If most of the mass of the system is concentrated at the center, as in the solar system, then the speed of any orbiting body, such as a planet, is inversely proportional to the square root of its distance from the center. The fact that spiral galaxies don't have a rotation curve like this indicates that their overall mass distribution is different than the distribution of matter that can be seen. This is an important piece of evidence for the existence of large amounts of dark matter in the Universe.