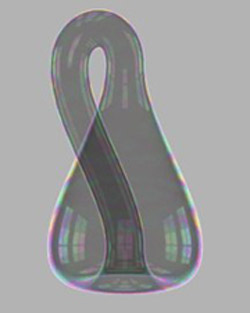 A mathematician named Klein,
Thought the Möbius band was divine,
He said, "If you glue,
The edges of two,
You'll get a weird bottle like mine."
– Leo Moser

Take a rectangle and join one pair of opposite sides to make a cylinder. Now join the other pair with a half-twist. The result is a Klein bottle. Sound easy? It is if you have access to a fourth dimension because that's what is needed to carry out the second step and to allow the surface to pass through itself without a hole. A true Klein bottle is a four-dimensional object. It was discovered in 1882 by Felix Klein when he imagined, as in the limerick, joining two Möbius bands together to create a single-sided bottle with no boundary.

An ordinary (three-dimensional) bottle has a crease or fold around the opening where the inside and outside of the bottle meet. A sphere doesn't have this crease or fold, but it has no opening. A Klein bottle has an opening but no crease: like a Möbius band, it is a continuous one-sided structure. Because it has no crease or fold, it has no verifiable definition of where it's inside and outside begin. Therefore, the volume of a Klein bottle is considered to be zero, and the bottle has no real contents – except itself! As the joke goes: "In topological hell the beer is packed in Klein bottles." Take a coin, slide it across the surface of a Klein bottle until it returns to its starting point, and the coin, as if by magic, will be flipped over. This is because, unlike a sphere or a regular bottle, a Klein bottle is non-orientable.

Although a Klein bottle can't be 'embedded' (that is, fully realized) in three dimensions, it can be "immersed" in three dimensions. Immersion is what happens when a higher dimensional object cuts through a lower dimensional one, producing a cross section. When a sphere is immersed in a plane, for example, it produces a circle. A three-dimensional glass model of a Klein bottle can be made by stretching the neck of a bottle through its side and joining its end to a hole in the base. Except at the side-connection (the nexus), this properly gives the shape of a four-dimensional Klein bottle. Just as a photo of such a bottle is of a three-dimensional Klein bottle immersion, so the immersion in real life is like a photo of the true four-dimensional bottle.