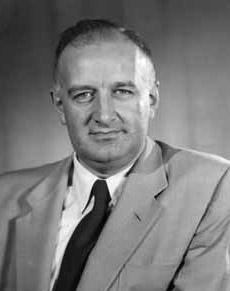 Hermann Kurzweg was a German-born aerodynamicist with the V-2 project and later with NASA. Kurzweg earned a PhD from the University of Leipzig in 1933 and during World War II was chief of the research division and deputy director of the aerodynamic laboratories at Peenemünde. There he carried out aerodynamic research on the V-2 and the antiaircraft rocket Wasserfall, as well as participating in the design of the supersonic wind tunnels. In 1946 he came to the United States and worked for the Naval Ordnance Laboratory at White Oak, Maryland, doing aerodynamics and aeroballistics research and becoming associate technical director of the lab in 1956. In September 1960 he joined NASA Headquarters as assistant director for aerodynamics and flight mechanics in the office of advanced research programs. The following year he became director of research in the office of advanced research and technology, and nine years later was made chief scientist and chairman of the research council in the same office. He retired in 1974.