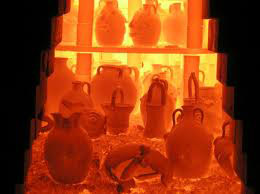 A kiln is a furnace used for firing ceramics. The best known type is the rotary kiln used chiefly for cement: the burners are at the lower end of a slowly rotating cylinder, perhaps 100 m long, which is at a slight angle to the horizontal. Material is placed in the upper end and slowly falls to the lower, where it is removed. In tunnel kilns the burners are at the center of a tunnel through which slowly pass cars loaded with material.

Early kilns were holes in the ground into which the ware was placed and covered by a large fire. Later, special wood- or coal-fired, oven-type kilns were built; today most kilns used gas and electricity.