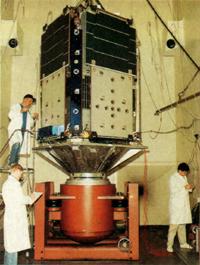 LACE in the Acoustic Reverberation Chamber.

LACE (Low-power Atmospheric Compensation Experiment) was part of a dual payload with RME (Relay Mirror Experiment) carrying laser defense experiments. LACE, also known as Losat-L, was built by the Naval Research Laboratory as a target for ground lasers, to investigate atmospheric distortion and compensation methods. Low-power lasers were beamed from the Air Force Maui Optical Station and picked up by onboard infrared and phased detectors. A laser then locked onto a reflector mounted on a 46-m boom to acquire the satellite and the sensor array returned data on the laser coverage, allowing the laser's adaptive optics to be adjusted to compensate for atmospheric distortion. The payload included ABE, the Army Background Experiment, an instrument that monitored background levels of neutron radiation in order to be able to discriminate between warheads and decoys, and the Ultraviolet Plume Instrument (UPI) to track rocket plumes.