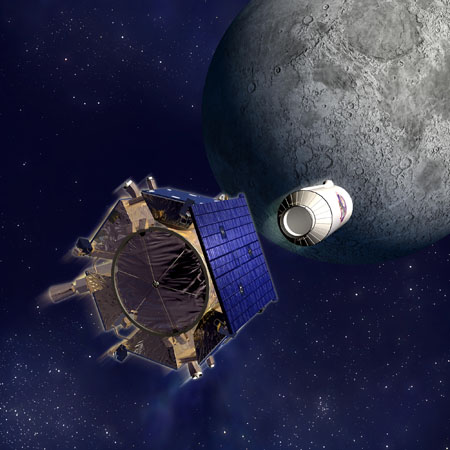 LCROSS (Lunar CRater Observing and Sensing Satellite) was a mission that sought to answer the question of whether water-ice exists inside permanently shadowed craters at the lunar poles. Hints of water-ice on the Moon first came in 1999 from measurements of concentrated hydrogen in dark lunar craters by Lunar Prospector. LCROSS had two main components: a large Centaur rocket upper stage and a smaller "shepherding spacecraft". The latter was designed to guide the Centaur to its target at the Moon's south pole, a shaded 100 km-wide crater called Cabeus.

In Apr 2006, NASA selected the LCROSS proposal for a low-cost, fast-track companion mission to the Lunar Reconnaissance Orbiter (LRO). LCROSS was launched along with LRO aboard an Atlas V rocket from Cape Canaveral on Jun 18, 2009. The LCROSS shepherding spacecraft and the Atlas V's Centaur upper stage made a fly-by of the Moon five days later and entered into an elongated Earth orbit to position LCROSS for impact at the Moons south pole. On final approach, the shepherding spacecraft and Centaur separated. The Centaur will act as a heavy impactor to create a debris plume that will rise above the lunar surface. It will slam in the crater Cabeus at roughly twice the speed of a bullet, throwing an estimated 350 metric tonnes of debris to altitudes of 10 km (6.2 mi) or more. Projected impact is currently: 9 October 2009 at 4:31 am PDT. With an energy equivalent to one-and-a-half tonnes of TNT, the collision will carve out a crater some 20 m (66 ft) wide and about 4 m (13 ft) deep. Following four minutes behind, the shepherding spacecraft will fly through the debris plume, collecting and relaying data back to Earth before impacting the lunar surface and creating a second debris plume.

As the ejecta rises above the target crater's rim and is exposed to sunlight, any water-ice, hydrocarbons or organics will vaporize and break down into their basic components. These components primarily will be monitored by the visible and infrared spectrometers. The near-infrared and mid-infrared cameras will determine the total amount and distribution of water in the debris plume. The spacecraft's visible camera will track the impact location and the behavior of the debris plume while the visible radiometer will measure the flash created by the Centaur impact.