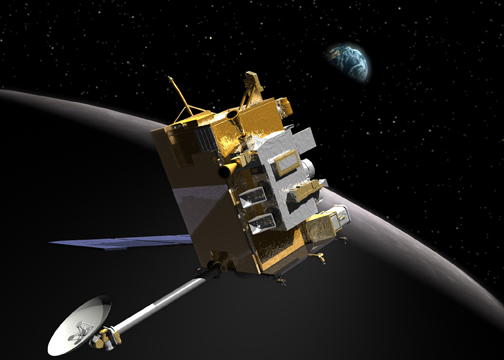 Rendering of LRO in lunar orbit.

Lunar Reconnaissance Orbiter was the first mission in NASA's Vision for Space Exploration, a plan to return to the Moon and then to travel to Mars and beyond. The objectives of the Lunar Reconnaissance Orbiter (LRO) are to find safe landing sites for future crewed missions, locate potential resources, characterize the radiation environment, and demonstrate new technology.

LRO was launched on June 18, 2009, by an Atlas V from Cape Canaveral Air Force Station. It was one of two payloads carried by the rocket, the other being the Lunar Crater Observation and Sensing Satellite (LCROSS), will send a rocket crashing into the Moon to scour the debris plume for evidence of water ice.

Upon arrival at the Moon, LRO was placed in low polar orbit (50 km) for a 1-year mission under NASA's Exploration Systems Mission Directorate. It will return global data, such as day-night temperature maps, a global geodetic grid, high resolution color imaging and the Moon's UV albedo. However there is particular emphasis on the polar regions of the moon where continuous access to solar illumination may be possible and the prospect of water in the permanently shadowed regions at the poles may exist.