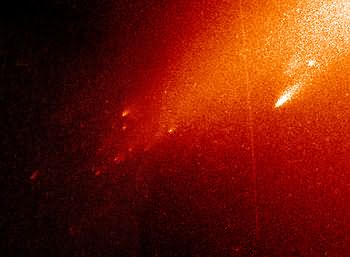 Comet LINEAR (C/1999 S4) was a comet that was observed to break apart as it approached the Sun. C/1999 S4 was discovered by the LINEAR program in September 1999. On 21–22 July 2000, a couple of days before perihelion on 24 July (0.75 astronomical units), it suddenly developed a long straight dust tail, suggesting a violent event in the nucleus. On 5 August, the Hubble Space Telescope showed a dozen or so tiny comets where the old nucleus had been. The disintegration of C/1999 S4 after perihelion had more to do with solar heating than with the Sun's gravitational force.