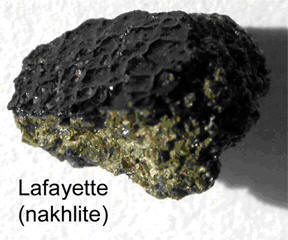 Most Mars meteorites show clear signs of having been exposed to moisture and salty water before they were ejected from the martian surface. In the case of the Lafayette specimen, enough weathered minerals are present that it has been possible to put a fairly precise date on when the water exposure took place – 670 million years ago. It contains the most water (0.387%), in the form of hydrated salts, of any martian meteorite. More interestingly, its composition was enriched in heavy water, as measured when the rock was step-wise heated. The mineral olivine, which generally does not survive unmodified for long when water is present, was also found to be the most altered of all the iron-rich minerals in the sample. When examined in thin sections, the meteor showed rusty-red grains surrounded by black veins, sometimes called a fibrous structure. Taken together, the evidence showed that the Lafayette meteorite had formed initially as an iron-rich, volcanic rock, and had then been exposed to water. Around 700 million years ago some saline began to seep into it, changing its mineral content. About 11 million years ago, the fragment was ejected from Mars as debris from an impact and then landed on Earth about 2,900 years ago. In 2000, scientists concluded that the salts identified in the Lafayette alteration (based mainly on the mineral iddingsite) formed by fractional evaporation of an acid brine on Mars. This result is particularly intriguing in light of evidence gathered by the Mars Exploration Rover Opportunity that sulfur-rich brines once soaked the spacecraft's landing site.