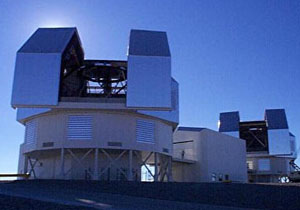 Las Campanas Observatory is an observatory at an altitude of 2,300 m on Cerro Las Campanas, 100 km northeast of La Serena, Chile, which was founded in 1971 and is owned and operated by the Carnegie Institution of Washington, DC. It is home to the twin Magellan Telescopes, the 2.5-m Irénée du Pont Telescope, opened in 1976, and the 1-m Swope Telescope, opened in 1971. The clear, dark skies here, and at the neighboring La Silla Observatory and Cerro Tololo Inter-American Observatory, offer excellent seeing unsurpassed anywhere on Earth.

The Magellan Telescopes are twin 6.5-m (21.3-ft) telescopes, jointly owned and operated by the Carnegie Institution, the Massachusetts Institute of Technology, and the Universities of Arizona, Harvard, and Michigan. The first telescope, named after Walter Baade, began scientific operation in Feb 2001. The second telescope, named after Landon Clay, saw first light in Sep 2002.