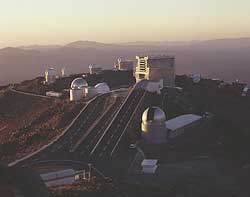 The Leonhard Euler Telescope is a 1.2-m Swiss reflector, built at the Geneva Observatory, located at La Silla Observatory, operated by the University of Geneva, and named in honor of the famous Swiss mathematician. It is used specifically, in conjunction with the Coralie spectrograph, to conduct high-precision radial velocity measurements principally to search for large exoplanets in the southern celestial hemisphere. Its first success was the discovery of a planet in orbit around Gliese 86.

Coralie is a high-precision échelle spectrograph developed through a collaboration between the Haute-Provence Observatory and La Silla Observatory. It is attached to the Leonard Euler Telescope, and the two instruments together form a dedicated, automated system for searching for large exoplanets in the southern hemisphere. Essentially an enhanced version of Elodie, Coralie has superior spectral resolution, a more efficient light detector, and improved instrumental control, including on-line data reduction and analysis. Coralie can measure the radial velocity of a star to a precision better than 7 m/s (25 km/h) – about the speed of a fast human runner. While in its commissioning phase in 1998, it was used in the detection of a planet in orbit around Gliese 86.