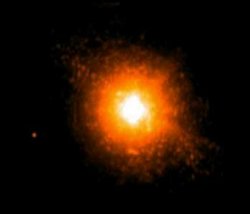 Gliese 86 is a nearby binary star system, in the southern constellation of Eridanus, in which has been found an exoplanet of the epistellar Jovian type. The separation of the two stars is about 10 AU (1.5 billion km) or about 100 times that between the planet and the star it revolves around. The planet's host star is a bright, rather cool dwarf, somewhat less massive and luminous than the Sun, just at the limit of naked-eye visibility.

Contrary to most stars with known planetary companions, Gliese 86 contains less metals than the Sun, by a factor of two. The observed characteristics of the planet together with the binary nature of Gliese 86 support the idea that planetary systems may form in ways other than the standard agglomeration scheme (see planetary systems, formation).