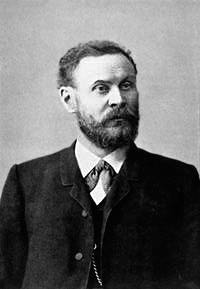 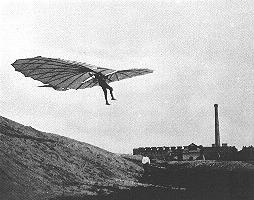 Otto Lilienthal was a German aeronautical engineer who is best known for his glider research and flights. A glider designed by George Cayley had carried a passenger in 1853, but this aircraft had no controls. Lilienthal was the first person to launch himself into the air and control his flight. He made a series of detailed and accurate observations about the properties of curved wing surfaces and calculated the air resistance for the various shapes. His book of aerodynamic data published in 1889 (Birdflight as the Basis of Aviation), as well as his other publications, greatly influenced aeronautical design. The Wright brothers read his findings carefully and used his data as a basis for their glider experiments. Lilienthal showed that mastering glider flight was necessary before successful powered flight could be achieved.

Lilienthal was born in Anklam, Germany. He began experimenting with flight when he was 13 when he and his brothers made a set of wings, strapped them to his body, and tried to fly. During his lifetime, he made more than 2,500 successful glider flights. He built his first glider in 1891, and his 'normal' glider was first constructed in 1894. His early gliders were monoplanes with cambered wings and fixed tail plane. In all, he built 18 designs – 15 monoplanes and three biplanes. All his designs applied and tested his theories. To fly, the pilot hung from his craft with his head and shoulders above the wings and his body and legs hanging below. The pilot had to shift his weight to achieve control of the craft. This was the major shortcoming of his designs. The pilot had to react to the movements of the craft rather than directing or initiating them, which required strength and quick reflexes.

It was the inability to control a glider that proved fatal. Lilienthal was killed on August 9, 1896, when he stalled and crashed to the ground while gliding.