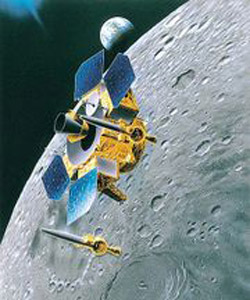 Lunar-A is a Japanese lunar probe that will be the first mission to study the internal state of the Moon using penetrators. After entering lunar orbit, the spacecraft will deploy three 13-kg spear-shaped cases, 90 cm long and 13 cm in diameter. These will be individually released over a period of a month and impact the Moon at 250–300 m/s, burrowing 1-3 m into the surface. One penetrator will be targeted at the equatorial area of the nearside (in the region of the Apollo 12 and 14 landing sites), one at the equatorial farside, and one near the border of the near- and far-sides. The penetrators are equipped with seismometers and devices to measure heat flow, and will transmit their data to the orbiter as it passes over each penetrator every 15 days. After deploying the penetrators, the orbiter will move to a 200–300 km near-circular orbit and use its monochromatic camera to image features near the terminator with a resolution of up to 30 m.

Lunar-A was scheduled for launch in 2004 but has been delayed for various reasons including, most recently, potential problems with its thrusters.