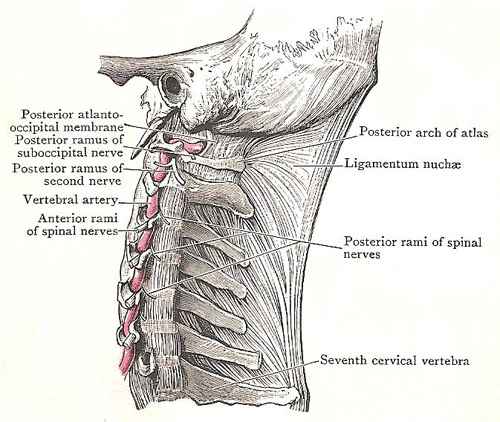 Ligamentum nuchae and the vertebral artery in the neck.

The ligamentum nuchae is a ligament that forms a strong, fibrous median partition between the muscles of the two sides of the back of the neck. It represents a powerful elastic structure in quadrupeds which helps to sustain the weight of the dependent head. In humans, however, there is not much elastic tissue in it, and it appears to be a continuation upwards of the supraspinous ligament from the spine of the seventh cervical vertebra to the external occipital protuberance. In shape, it is nearly triangular. By its base it is attached to the external occipital crest; by its anterior border it is fixed by a series of slips to the posterior tubercle of the atlas and to the spines of the other cervical vertebrae. Its apex is attached to the spine of the seventh cervical vertebra; and its posterior border gives origin to muscles.