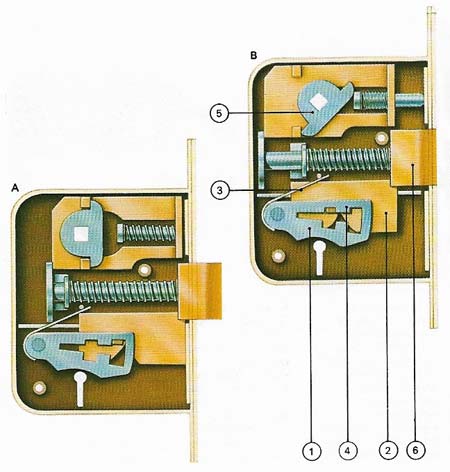 Fig 1. Lever tumbler rocks date back to the 18th century. Now usually internal doors (A), their most important component is the tumbler (1), a simple lever that is securely held on the bolt (2) by a spring (3). A projection on the tumbler, or stump (4), prevents the bolt from moving back. If a key is inserted, it engages the tumbler and is shaped so that it pushes the tumbler upwards (B) by the right amount, the key is then able to turn enough to engage the the bolt at a point and move it back into the lock. Turning the door handle then makes the cam (5) move the latch (6) across. For extra security, a series of different tumblers can be used, with the key lifting each one in turn. 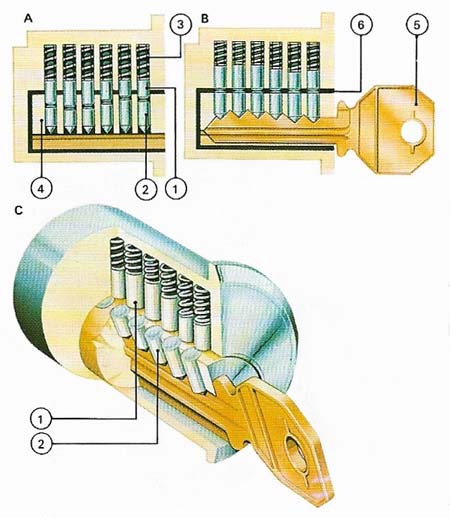 Fig 2. The modern cylinder lock (A), invented by Linus Yale Jr in 1861, operates on a principle similar to that used in ancient locks. In the Yale, several two-section pin-tumblers (pins (1), drivers (2)) of different lengths are forced downwards by springs (3) into holes in a rotating plug or cylinder (4). When the correct key (5) is inserted (B), the pins are aligned between the plug and body (6) letting the plug turn (C).

A lock is a mechanism fitted to a door or case to prevent entry to people other than those with a specialized key or other device. The earliest known mechanical lock is from ancient Egypt, c. 2000 BC. The bolt was hollow, with a number of holes bored in its top; one of the bolt staples held a number of wooden pegs which fell into the holes in the bolt, holding it in place. The key could be fitted into the bolt; it had spikes in the same pattern as the holes, and thus could lift the pegs clear. The ancient Greeks situated their locks on the inside of the door, access being achieved via a keyhole to whose shape the key conformed. The Romans improved the Egyptian design by having pegs of different shapes and using springs to drive the pegs home; and invented the warded lock, whose key must be slotted to clear wards, obstacles projecting from the back of the lock.

The modern lever-tumbler lock (Fig 1) was invented Robert Barron (1778): levers fit into a slot in the bolt patterned such that each lever must be raised a different distance by the key to free the bolt. Jeremiah Chubb added another lever to jam the lock if another key were tried (1818). The Bramah lock, invented by Joseph Bramah (1784), has a cylindrical key slotted to push down sprung sides, each of which must be depressed a different distance to clear an obstacle.

Most domestic locks are now Yale locks (Fig 2), invented by Linus Yale Jr (1821–1868) in 1861. An inner cylinder plug has holes into which sprung drivers press pins of different lengths. The key is patterned to raise each pin so that its top is flush with the cylinder, which can then turn. Modern safes have combination locks and time devices so that they can only be opened at certain times.