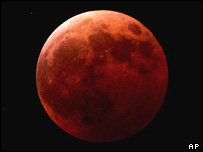 Unlike a total solar eclipse, which lasts a maximum of 7½ min, the lunar variety happens at a more leisurely pace. The shadow made by Earth as it blocks the Sun is 16,782 km wide where the Moon crosses through it. The Moon itself is 3,476 kilometers wide, and is traveling about 3,700 km/h. So, roughly 3 hr elapse from the time the Moon first touches the umbra until the last part of the Moon passes out of it. The middle third of the journey is the part of the eclipse that is total. The magnitude of a lunar eclipse is the fraction of the lunar diameter obscured by Earth's shadow at the greatest phase of an eclipse, measured along the common diameter.

Although lunar eclipses have no great scientific significance, they are a wonderful natural spectacle. In the past things were different. A lunar eclipse was a portent from the sky, possibly a sign of divine displeasure. But as superstition gave way to reason, it came to be regarded as an example of the majestic clockwork of the heavens. Thomas Hardy said the movement of Earth's shadow over the Moon had an "imperturbable serenity". The color effect is the stuff of myth and legend. An account in 331 BC said: "...all her light was sullied and suffused with the hue of blood." Some ancients called it "the time of the blood of the Great Mother's wisdom", linking the Moon's color with menstruation. This was a natural thing to do given the link between the length of the month and human fertility. In 1503, Christopher Columbus, stranded in the Caribbean, used a lunar eclipse he knew would take place to impress the natives and secure respect and fear, as well as a regular supply of food.