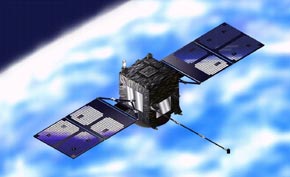 MDS (Mission Demonstration test Satellite) is a 450-kg satellite designed to evaluate on-orbit performance of a variety of technologies, including testing the radiation resistance of some commercial semiconductor devices and new solar cells, and the effectiveness in space of a new type of battery, solid-state data recorder, and parallel computer system. MDS-1 was launched by NASDA (National Space Development Agency) using an H-2A launch vehicle on 4 February 2002. It is now operating from a highly elliptical orbit that flies it through the Van Allen radiation belts.