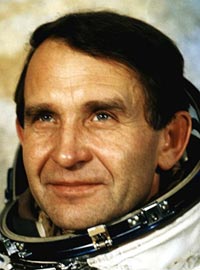 Oleg Makarov was a Soviet spacecraft designer and cosmonaut. Makarov joined the Soviet space program in 1964, helped design the Soyuz spacecraft, and was selected to be an engineer cosmonaut in November 1966. In 1967, he was assigned to the lunar training group with which he was involved until 1969 when he began to train as a Salyut crewman. He served as flight engineer on four Soviet missions between 1973 and 1980, including two visits to Salyut 6, which he helped design. In 1980 he was a backup for the Soyuz T2 crew.

Makarov's first flight was Soyuz 12 in September 1973, the first Soviet manned mission in the wake of the Soyuz 11 tragedy which killed three cosmonauts during reentry. Following the accident, the Soyuz command module had been redesigned to allow two cosmonauts to wear pressure suits during launch and reentry. Makarov and commander Vasily Lazarev returned to Earth safely after only two days. On 5 April 1975, Makarov and Lazarev were launched aboard Soyuz 18-1 for a planned 60-day mission aboard Salyut 4. However, only minutes into the flight, separation problems occurred with the Soyuz booster. The Soyuz command module containing Makarov and Lazarev was separated from the booster and plunged back to Earth, eventually coming to rest on a Siberian mountainside near the Chinese border. The emergency reentry subjected the cosmonauts to 18g, twice the normal g-load, and may have caused injuries. Certainly Lazarev never flew in space again. Makarov did, twice, with better luck. He was aboard Soyuz 27 in January 1978, a week-long flight during which he and commander Vladimir Dzhanibekov docked with the Salyut 6, swapping vehicles with the Soyuz 26 crew of Yuri Romanenko and Georgi Grechko, who were in the first month of a planned three-month mission. It was a rehearsal for future operations that permitted cosmonauts to remain aboard Salyut stations for missions lasting 9 months. In November 1980 Makarov returned to Salyut 6 aboard Soyuz-T3. The three-man crew of Makarov, commander Leonid Kizim and flight engineer Gennady Strekalov overhauled several systems inside Salyut 6 during their 13 days in space, allowing Salyut 6 to be occupied in early 1981 for another long duration mission. In 1981 he earned his candidate of technical sciences degree (PhD) from the Moscow Bauman Higher Technical School (now Moscow Bauman State Technical University) and published a futuristic work, The Sails of Stellar Brigantines, written in collaboration with Grigory Nemetsky.