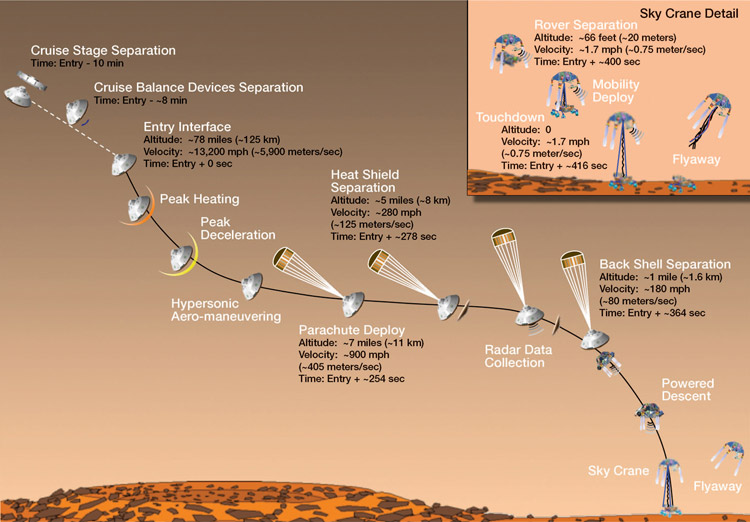 Stages in the descent of Mars Curiosity to the surface of Mars. 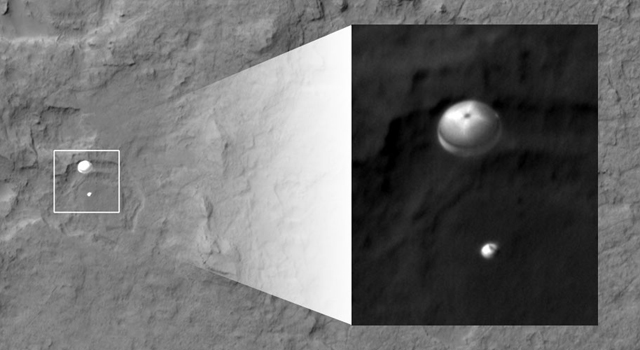 Mars Curiosity – the largest unmanned vehicle ever to land on another world – descended safely and successfully to the surface of Mars on Aug 5, 2012. (Follow the progress of Curiosity's explorations in the Curiosity mission diary). The capsule containing Curiosity and the descent vehicle began its descent by plunging into the Martian atmosphere traveling at 5,900 m/s. At the point of entry into the atmosphere small charges detonated, throwing off two 75-kg blocks of tungsten, each about the size of a laptop. The loss of these weights tipped the capsule so that it could catch the thin Martian air and glide like a skydiver in a wingsuit. Small rockets fired to keep the capsule on track, entirely under the control of onboard autonomous software.

At a height above the surface of 11 km, six more metal weights, each weighing 25 kilograms, were jettisoned to tilt the capsule again in readiness for the opening of its giant parachute. In less than two minutes, the parachute slowed the spacecraft from 400 m/s to 80 m/s. After the parachute opened, the heat shield fell away, exposing Curiosity's landing radar and cameras to the atmosphere. Immediately the cameras started taking images of the surface, at the rate of four frames a second.

At an altitude of one mile (1.6 km), the parachute was released and the descent vehicle entered free fall for a moment before its eight retrorockets ignited, slowing the vehicle down for the final stage of landing. Hovering just 20 meters above the ground, the descent stage deployed its Sky Crane to slowly lower Curiosity to the ground using three nylon tethers. Curiosity wheels touched the surface, the tethers were released and the descent stage moved well clear of the rover's landing spot before itself coming down on the Martian surface.

Why use such a complicated device as the Sky Crane? Curiosity's predecessors, the Mars Exploration Rovers Spirit and Opportunity, came down using airbags to cushion their final fall, bouncing and rolling for some distance before coming to a halt. But Curiosity weighs five times as much and would have burst any airbags. The solution that NASA engineers came up with instead was the ingenious, if seemingly risky, Sky Crane.