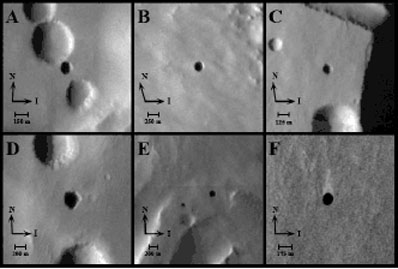 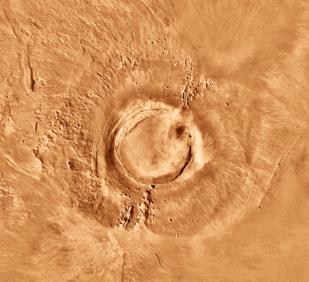 The tentative identification of seven caves on Mars, on the flanks of the Arsia Mons volcano, was announced in March 2007 at the Lunar and Planetary Science Conference in Houston, Texas. The discovery, based on pictures from NASA's Mars Odyssey spacecraft and supported by temperature data from Odyssey's Themis instrument, is significant because caves may be the only natural structures capable of protecting primitive life forms on the surface of Mars from bombardment by micrometeoroids, ultraviolet radiation, solar flares, and high energy particles.

The spacecraft spotted what seemed to be vertical "skylight" entrances to caves below the surface. There is a sheer drop of between about 80 m (262 ft) and 130 m (426 ft) or more to the cave floors below. The candidate caves are of sufficient depth their floors mostly can't be seen through the opening. The researchers described the candidate caves as 'seven sisters' and gave them all names: Abbey, Annie, Chloe, Dena, Jeanne, Nicki, and Wendy. During the day, one of the features – Annie – is warmer than surrounding pits and cooler than sunlit areas. Night time temperatures are warmer than nearly all surrounding areas. The cave entrances are between 100 m (330 ft) and 252 m (828 ft) wide. Because in most cases the cave floors can't be seen, only minimum depths are known: the researchers calculate they must extend between 73 m (240 ft) and 96 m (315 ft) below the surface. However, in one image taken of Dena by the Mars Odyssey Camera, a floor can be seen. Using the data, the authors estimate that this cave must extend 130 m (426 ft) below the surface.

The discovery of caves on Mars also has potential significance for human missions to Mars. The caves would give protection from radiation and, if they held significant amounts of water ice, would be able to supply an underground base with all the water it needed.