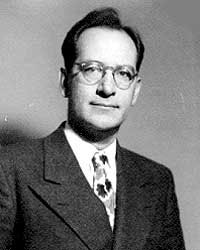 John Mauchly was a US physicist and engineer who, with Presper Eckert Jr (1919–1995) invented and built (1946) the first general-purpose computer – the Electronic Numerical Integrator and Computer (ENIAC). Taking up 15,000 ft2, ENIAC was bought as a military calculator by the US War Department. The two men, who met in 1943 on the faculty of the University of Pennsylvania, next built the Electronic discrete Variable Computer (EDVAC), whose ability to store programs helped to launch the computer revolution, and then in 1951 the Universal Automatic Computer (UNIVAC) for the US Census Bureau. In 1948 they formed the Mauchly Computer Corporation that was sold to later to Remington Rand.