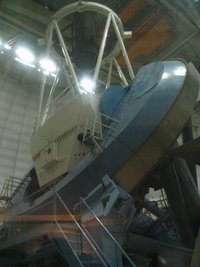 The Mayall Telescope is the largest optical telescope at Kitt Peak National Observatory. The 4-m (158-in) Nicholas U. Mayall Telescope, named after a former director of the observatory, was completed in 1970.

The Mayall Telescope is used primarily for infrared and faint visible light observations and has played an important role in many fields of research. The rotation curves of distant galaxies have been observed in order to determine the role of dark matter in the universe. Also, the telescope has helped to establish the dynamical structure of elliptical galaxies such as M87 and M49.