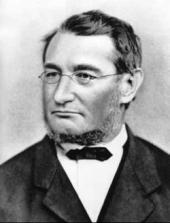 Julius Mayer was a German physician and physicist who contributed to the formulation of the law of conservation of energy (see conservation of mass and energy). Mayer was born at Heilbronn and studied medicine at Tübingen, Munich, and Paris, began life as a ship's surgeon, and settled in his native town to practice his profession in 1841. While at Batavia in 1840 his attention was drawn to the studies he thereafter pursued in his leisure time. In 1842 he published in Liebig's Annalen a preliminary statement of the mechanical theory of heat, in which he clearly determined the numerical relation between heat and work. Three years later he restated his views, and also theorized on a meteoric origin of the Sun's heat. Contemporaneously, the mechanical theory of heat was worked out independently by James Joule in England. Lack of recognition of his priority in the matters of the mechanical equivalent of heat and the law of conservation of energy led Mayer to attempt suicide and he was committed to an asylum.