Apparatus used by James Joule in the determination of the mechanical equivalent of heat, 1849. 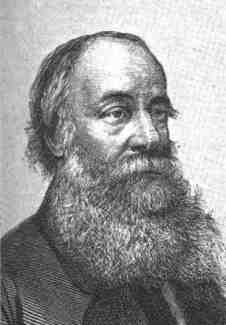 James Joule. "Up to the end of 1854, when the brewery was sold, I attended business pretty constantly from nine to six, my times for experiments being the morning before breakfast and the evening.".

James Joule was a British physicist who showed that heat energy and mechanical energy are equivalent and hinted at the law of conservation of energy. From 1852 he and William Thomson (Lord Kelvin) performed a series of experiments in thermodynamics, especially the Joule-Thomson effect. The joule (unit) is named for him. See also Joule's laws.

The son of a Salford brewer, Joule began his scientific career by carrying out a series of experiments on electricity and magnetism during the 1840s. He worked closely with William Sturgeon who, for a short time, was employed to organize a gallery displaying all that was modern in scientific apparatus. Sturgeon was representative of a new group of individuals who looked to science to provide their livelihood.

Joule became interested in transformations of energy. He demonstrated that heat is generated by the passage of an electric current rather than simply transferred from another part of the electrical circuit which is therefore cooled. He went on to establish the mechanical equivalent of heat through his famous paddlewheel experiments.

Some of the finest pieces of Joule's apparatus were made by the well-known Manchester instrument-maker, J. B. Dancer. For many of the experiments concerning the mechanical equivalent of heat, it was necessary to use extremely sensitive and accurately calibrated thermometers. Joule worked closely with Dancer to improve the design and construction of thermometers.

Joule received many honors for his scientific achievements. In 1850 he was elected Fellow of the Royal Society. He became a Council member in 1857. He received honorary degrees from several universities including Trinity College, Dublin, and Oxford.

Joule's laws are as follows:

1. The rate of heat production by a steady current in any part of an electrical circuit is proportional to the resistance and to the square of the current. In other words, the heat (Q) produced when an electric current (I) flows through a resistance (R) for a time (t) is given by Q = I 2Rt.

2. The internal energy of a given mass of gas is independent of its volume and pressure, being a function of temperature alone. This law applies only to ideal gases (for which it provides a definition of thermodynamic temperature) because in a real gas intermolecular forces would cause changes in the internal energy should a change of volume occur.