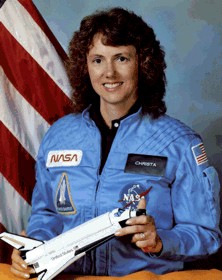 Christa McAuliffe was an American astronaut and schoolteacher who flew aboard flight STS-51L of the Space Shuttle Challenger as a participant in NASA's Teacher in Space Project. She and the other six members of the crew died when the Shuttle exploded just over a minute after launch (see Challenger disaster). McAuliffe taught economics, law, and American history at Concord High School in New Hampshire. She was selected by NASA as the primary candidate for the Teacher in Space Project in 1985 and flew as a payload specialist on STS-51L.