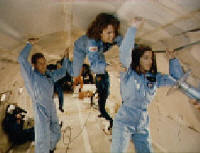 For details of individual women who have been involved with the space program, see the following entries: