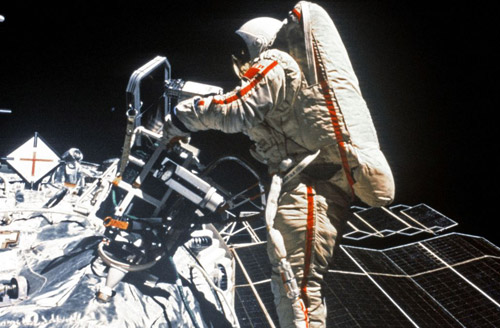 Svetlana Savitskaya during her three-hour spacewalk outside Salyut 7 on Aug 19, 1982.

Svetlana Savitskaya is a retired Soviet cosmonaut, the second woman to orbit the Earth, and the first to go on a space walk. She spent a total of over 19 days in space.

The daughter of a World War II flying ace, who was also Deputy Commander of the Soviet Air Defenses and a two-time Hero of the Soviet Union, Savitskaya was refused entry to pilot school at age 16 but continued parachuting and by her 17th birthday had made 450 jumps. The following year, she entered the Moscow Aviation Institute (MAI) and in 1970 won the world aerobatics competition in Hullavington as a member of the Soviet National Aerobatics Team. Following her graduation from the MAI in 1972, Savitskaya was accepted at a test pilot school where she set world records in turboprop and supersonic aircraft, including the female airspeed record of 2,683 km/h in a MiG-21. On 30 July 1980, she was selected to become a cosmonaut (the 53rd) and, on 19 August 1982, became the second woman in space when she and her fellow crewmembers, Leonid Popov and Alexander Serebrov, flew Soyuz T-7 to dock with the Salyut 7 space station. During her second spaceflight, aboard Soyuz T-12 on 25 July 1984, Savitskaya and fellow cosmonaut Vladimir Dzhanibekov carried out a three-and-a-half-hour space walk to conduct welding experiments on Salyut 7. Subsequently, she was appointed commander of an all-female crew to Salyut 7 for International Women's Day, but the mission was canceled because of problems with the space station and the limited availability of Soyuz T spacecraft. In 1987,

Savitskaya was made deputy to the chief designer at Energiya, and in 1989 became a member of the Soviet parliament. She retired as a cosmonaut on 27 October 1993.