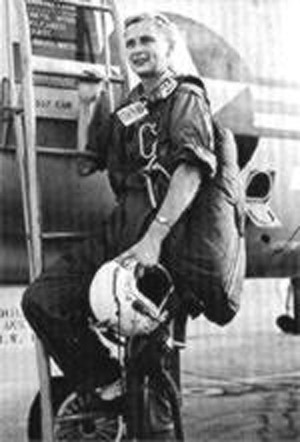 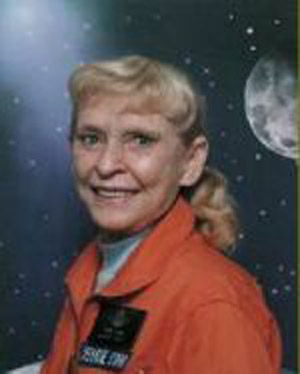 Geraldyn Cobb was the leading female aviator and the first woman to undergo the same physical and psychological fitness testing regimen as the Mercury Astronaut Selection Tests. Her participation in the Mercury Project and later manned programs, for which she was at least as well qualified as the men who were selected (see Mercury Seven), was prevented because of sex discrimination (see Mercury Thirteen).

Born in Oklahoma, Cobb first flew at the age of 12 in the backseat of an open-cockpit biplane, a 1936 Waco, flown by her father. By age 16, she was barnstorming around the Great Plains in a Piper J-3 Cub, dropping leaflets over small towns announcing the arrival of an circus. She slept under the Cub's wing at night and scraped together the gas money to practice her flying by giving rides.

She gained her Private Pilot's license at the age of 17, her Commercial Pilot's license on her 18th birthday, and then began looking for a flying job. However, with the return of so many male pilots after World War II, and the discriminatory attitude to women, she was forced to take on less popular flying jobs, such as crop-dusting and pipeline patrol. She went on to earn her Multi-Engine, Instrument, Flight Instructor and Ground Instructor ratings as well as her Airline Transport license. By age 19, Cobb was teaching men to fly, and by 21, she was delivering military fighters and four-engine bombers to foreign Air Forces around the world.

Following a three-year romance with another pilot, which ended tragically with an explosion of his airplane over the Pacific, Cobb went on to set new international records for speed, distance, and absolute altitude while she was still in her twenties. When she became the first woman to fly in the world's largest air exposition, the Salon Aeronautique Internacional in Paris, her fellow airmen named her Pilot of the Year and awarded her the Amelia Earhart Gold Medal of Achievement. Life Magazine named her one of the nine women of the "100 most important young people in the United States."

In the infancy of the Space Age, when the United States began selecting the first astronauts in 1959, Dr. W. Randolph Lovelace II invited Cobb to undergo the physical fitness testing regimen that he had helped to develop to select the original US astronauts – the Mercury Seven. She became the first American woman to do so and proved every bit as successful in the tests as had John Glenn and the other Mercury astronauts, passing all three phases with flying colors. Thereafter, Cobb and Lovelace recruited 25 other qualified women pilots. Jacqueline Cochran, the famous American aviatrix and an old friend of Lovelace, joined their recruiting effort and volunteered to pay the testing expenses. Twelve of the chosen women passed the first series of tests; however, the American space program did not open the ranks of its astronaut corps to women until 1978.

Cobb was appointed by NASA Administrator James Webb as consultant to the nation's space program in May 1961, but NASA's requirement that astronauts have military jet test pilot experience eliminated all women since women were not allowed to fly in the military. A year later, the Soviet cosmonaut Valentina Tereshkova became the first woman in space.

Cobb was honored by the governments of France, Brazil, Colombia, Peru and Ecuador. President Nixon awarded her the Harmon Trophy as the top woman pilot in the world. For her many years of humanitarian work in the Amazon rainforest, delivering supplies to native tribes, she received numerous honors and been nominated for the Nobel Peace Prize. She continued to fly on a regular basis into old age.