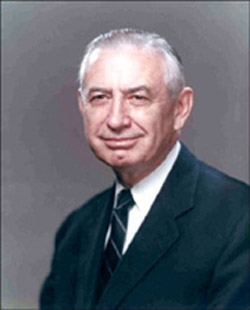 William Lovelace was an accomplished physician, chief of surgery at the Mayo Clinic, and leading figure in aerospace medicine during the early years of the American space program. Lovelace experimented on problems of high altitude escape and in World War II survived deliberately parachuting from a B-17 at over 12,000 m to validate the use of a bail-out oxygen bottle during a high-altitude descent; the force of his 'chute opening was so violent that it knocked him unconscious and stripped the gloves from his hands. In 1958, Lovelace was appointed chairman of NASA's Special Advisory Committee on Life Science at NASA Headquarters by the Agency's first administrator, T. Keith Glennan, and went on to play a central role in selecting the Mercury Seven astronauts.