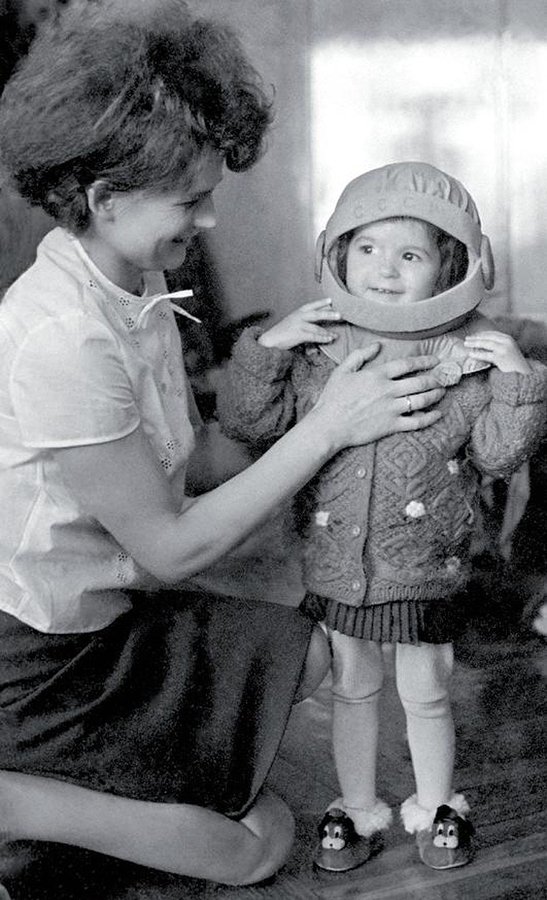 Valentina Tereshkova and her daughter, Elena, a few years after her orbital flight in June 1963. (Elena is the first person both of whose parents have flown in space.)

Valentina Tereshkova is a retired Soviet cosmonaut who became the first woman in space. Tereshkova was born in Maslennikovo, near Yaroslavl in western Russia. Her father was a tractor driver and her mother worked in a textile plant. Tereshkova began school at age eight, but withdrew to work in the same factory as her mother at age 16. She continued her education through correspondence courses, during which time she parachuted as a hobby.

When Tereshkova was selected for the Soviet space program in 1962, she became the first person to be recruited without experience as a test pilot, her selection being based instead on her parachuting skills. Tereshkova was assigned to be the pilot of Vostok 6 and given the radio name "Chaika," Russian for "seagull." The Vostok craft lifted off from Baikonur Cosmodrome on June 16, 1963. It remained in space for nearly three days and orbited the Earth 48 times, once every 88 min. In a departure from earlier Soviet spaceflights, Tereshkova was allowed to operate the controls manually. The craft reentered Earth's atmosphere on June 19 and Tereshkova parachuted to the ground, in the manner typical of cosmonauts at this time. She landed, bruising her nose on impact, approximately 610 km northeast of Qaraghandy, Kazakhstan. It would be another 19 years before the next woman, Svetlana Savitskaya, flew in space.

Tereshkova became a member of the Communist party and a representative of the Soviet government. She also married in November 1963, to fellow cosmonaut Andrian Nikolayev. The following year the couple had their first and only child, Elena – the first child whose parents had both traveled in space. Tereshkova is currently a member of the Russian State Duma.