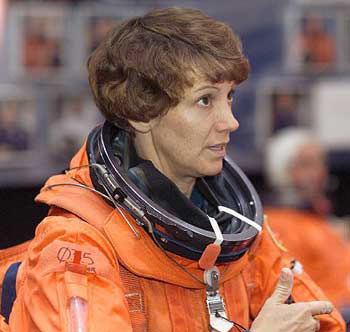 American astronaut Eileen Collins was the first woman to command a Space Shuttle mission. A United States Air Force colonel, Collins holds various degrees including a BA in mathematics and economics from Syracuse University in 1978, an MS in operations research from Stanford University in 1986, and an M.A. in space systems management from Webster University in 1989. Selected by NASA in Jan 1990, she became an astronaut in July 1991. Collins served as the first female pilot of the Shuttle on mission STS-63 (February 2–11, 1995), during which the Shuttle completed its first docking with Mir. Again she piloted the Shuttle on the joint American-Russian mission STS-84 (May 15–24, 1997) before being appointed commander of STS-93 (July 22–27, 1999), the highlight of which was the successful deployment of the Chandra X-Ray Observatory. She returned to space in Jul 2005 as commander of Discovery on the first Shuttle flight following the loss of Columbia during reentry. She left NASA in 2006 to pursue private interests and spend more time with her family.

Eileen Collins first learnt about flying in books, and at the age of 16 began to save to pay for flying lessons. "My family never had the money to pay for flying lessons or... even a ride in an airplane," she said in an interview on the NASA website. "I had saved up $1,000, and I took that to my local airport, at age 19," she said. "I asked them to teach me how to fly." She began military pilot training for the Air Force in 1978, the same year NASA opened the Shuttle program to women.