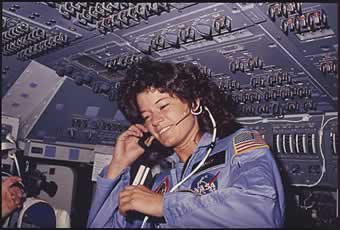 Sally Ride was the first American woman to fly in space. Ride grew up in Los Angeles and earned degrees in physics and English from Stanford University. She was chosen by NASA as an astronaut in 1978 and served as a mission specialist for Space Shuttle flight STS-7 (1983) and as a mission specialist on STS 41–G (1984). Following the Challenger disaster she was elected as a member of the presidential commission to investigate the accident, and chaired a NASA task force (1986–87) that prepared a report on the future of the civilian space program.

Ride resigned from NASA in 1987 to join the Center for International Security and Arms Control at Stanford University. In 1989 she assumed the directorship of the California Space Institute, part of the University of California at San Diego. She sought to encourage younger students, particularly women, through her science education startup Sally Ride Science, which created science programs and publications for elementary and middle school students and educators.

Ride wrote five science books for children and served on dozens of NASA, space, and technology advisory panels, including the board that investigated the second fatal space shuttle accident in 2003.

She died of pancreatic cancer at the age of 61.