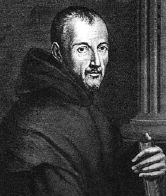 Marin Mersenne was a French monk, philosopher, and mathematician best remembered for his work to find a formulate to generate prime numbers based on what are now known as Mersenne numbers. However, he was not primarily a mathematician; he wrote about music theory and other subjects, edited works of Euclid, Archimedes, and other Greek mathematicians, but most importantly corresponded extensively with mathematicians and other scientists in many countries. At a time before scientific journals existed, Mersenne was at the heart of a network for information exchange.

The search for Mersenne primes has been going on for centuries. They are named after Marin Mersenne who, in 1644, helped the search gain wide recognition by writing to many mathematicians of his conjecture about which small exponents yield primes. Around the time that Mersenne's conjecture was finally settled, in 1947, digital computers gave a new impetus to the hunt for Mersenne primes. As time went on, larger and larger computers found many more Mersennes and, for a while the search belonged exclusively to those with the fastest computers. This changed in 1995 when the American computer scientist George Woltman began the Great Internet Mersenne Prime Search (GIMPS) by providing a database of what exponents had been checked, an efficient program based on the Lucas-Lehmer test that could check these numbers, and a way of reserving exponents to minimize the duplication of effort. Today GIMPS pools the combined efforts of dozens of experts and thousands of amateurs. This coordination has yielded several important results, including the discovery of the Mersennes M3021377 and M2976221 and the proof that M756839, M859433, and M3021377 are the 32nd, 33rd, and 34th Mersennes.