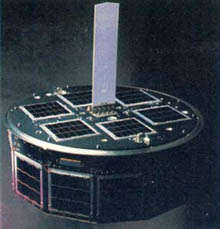 MicroSat was a constellation of seven 22-kg microsatellites, sponsored by DARPA (Defence Advanced Research Projects Agency), and launched on 16 July 1991, by a Pegasus rocket into a 359 × 457 km × 82° orbit, rather than the higher intended orbit of 833 × 833 km. The satellites supported "bent-pipe" relay for voice, data, fax, and slow speed video communications, as well as hi-fidelity secure voice and encrypted data and limited store-and-forward communications, and were intended to provide data for ArcticSat, a system for communicating with nuclear submarines under the polar cap. However, this ability was compromised by the lower than planned orbit which caused the satellites' footprints to be separated. All the spacecraft decayed in January 1992 after little operational use. The mission was also known as the Small Communications Satellite (SCS).