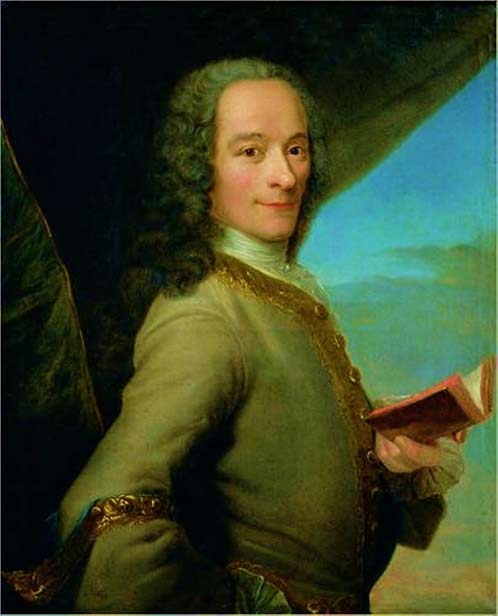 François-Marie Arouet, known by the pen name Voltaire and author of Micromégas.

Micromégas, published in 1752, is Voltaire's satirical, interplanetary romance in which a colossal native of Sirius joins forces with a Saturnian "dwarf", a mere one mile in height, to explore the Solar System. They discover that Mars has two moons – evidently a borrowing from Swift (see Swift, Jonathan and the moons of Mars).

Voltaire doesn't start his tale on Earth or even in the Solar System, but on Sirius, which he takes to be a giant star. The Sirians are proportionately larger – the hero, Micromégas, is 120,000 royal feet, or about 20 miles, high. A precocious individual, he had mastered geometry when he was only 250 years old, and by the time he was 450 he was busily studying, and writing about, the possibility of life on other worlds. Convicted of heretic beliefs, he was banished for a 800 years, a sentence Micromégas put to good use. He decided to explore the universe, using sunbeams, comets, and a knowledge of gravitation to make his trip easy and pleasant. Traveling across the Milky Way from star to star, he reaches the Solar System and settles down for a visit on Saturn, a puny planet by his standards, whose inhabitants live only 1,500 years.

Micromégas strikes up a friendship with the secretary of the grand academy of Saturn and the two argue about, and philosophize on, all kinds of subjects. Finally, they visit the rest of the Solar System, flying first to the rings and moons of Saturn, then to Jupiter and Mars. At last they reach Earth, a tiny world that the Sirian and Saurnian are convinced is uninhbited. But peering idly through a diamond, Micromégas sights a whale swimming in an ocean he had assumed to be a mere puddle. Then a ship bearing explorers comes into view. Reluctantly. Micromégas acknowledges that even so tiny, so insignificant a world as Earth can harbor rational beings.