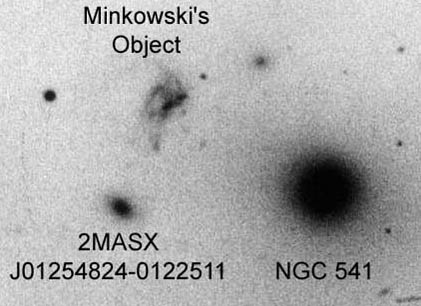 Minkowski's Object (Arp 133) is a peculiar dwarf galaxy in the constellation Cetus lying about one arc-minute ENE of the elliptical galaxy NGC 541. The latter is also a radio galaxy that has a jet of ionized plasma emanating from its nucleus. Evidence now suggests that a burst of star formation in Minkowski's Object (Arp 133) was actually triggered by the jet from the nucleus of NGC 541 because the body of the jet can be traced all the way to the region where the new stars are forming. If this turns out to be true, it will be the first known case of a jet from one galaxy influencing a neighboring galaxy and triggering new star birth. The details of just how this could occur are uncertain.