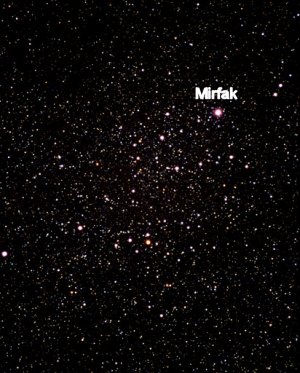 Mirfak (Alpha Persei) is the brightest star in the constellation Perseus; its name comes from a long Arabic phrase that means 'the elbow of the Pleiades.' A yellow supergiant F star, Mirfak is important in that it lies just at the edge of the properties of Cepheid variables, and thus is instrumental in defining the nature of such stars (and may be a very modest pulsator itself).

Unlike the usual case with constellations, many of the stars of Perseus are physically associated, resulting in the figure's great prominence. Mirfak is the brightest star of the young Alpha Persei Moving Cluster (Melotte 20), which contains many of the fainter surrounding stars, most of which are quite hot and massive.