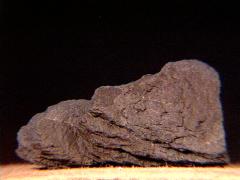 Maghemite is a form of iron oxide, also known as gamma Fe2O3, with the crystalline structure (and strongly magnetic nature) of magnetite but the composition of hematite, which can act as a powerful catalyst. On Earth, it is usually found only around the edges of regions of hydrothermal or magnetic activity, where the temperature ranges from 300 to 400°C. The abundance of water on Earth has converted much of the maghemite into a noncatalytic form, but on Mars it has survived virtually unaltered. It was cited by Vance Oyama in his explanation of the results of the Viking labeled release (LR) experiment. Synthetic maghemite is being studied as part of an electrically conductive and magnetizable film in nanocomposite structures.