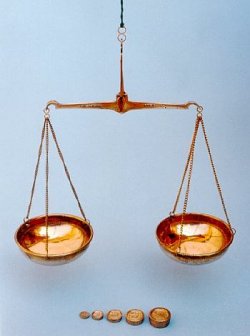 Problems that involve measuring a given quantity of liquid by pouring from one vessel into others of known capacity go back to medieval times. One of the earliest to appear in print was given by Niccolò Tartaglia and asks for 24 oz of balsam to be divided into three equal portions using vessels that hold 5, 11, and 13 oz, respectively.

A similar problem was posed by a fellow traveler to the young Siméon Poisson while on a journey. Poisson's family had tried to steer him in to careers ranging from a surgeon to a lawyer, the last on the theory that he was fit for nothing better. He seemed inept at everything he did. However, he saw the solution to the measuring problem immediately and realized his true calling. Thereafter, he threw himself into mathematics and became one of the greatest mathematicians of the 19th century.

The classic weighing problem was proposed by Claude-Gaspar Bachet and entails finding the least number of weights needed to weigh any integral number of pounds from 1 lb to 40 lb inclusive, when we are not allowed to put a weight in either of the two pans. The answer is 1, 3, 9, and 27 lb. Tartaglia had previously stated the same puzzle with the condition that the weights may only be placed in one pan, in which case the solution is 1, 2, 4, 8, 16, and 32 lb.

Here is a measuring problem from Henry Dudeney's Canterbury Puzzles, which Dudeney claimed was the most popular of the whole collection:

Here be a cask of fine London ale, and in my hands do I hold two measures – one of five pints, and the other of three pints. Pray show how it is possible for me to put a true pint into each of the measures.