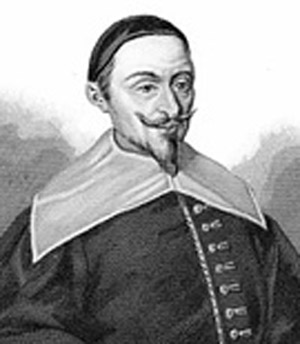 Claude Bachet was a poet and early mathematician of the French Academy, best known for his translation in 1621 of Diophantus's Arithmetica, the book that Pierre de Fermat was reading when he inscribed the margin with his famous Last Theorem.

Bachet is also remembered as a collector of mathematical puzzles, many of which, including river-crossing problems, measuring and weighing puzzles, number tricks, and magic squares, he published in Problèmes plaisans et délectables qui font par les nombres (1612). One of the puzzles is to find the least number of weights that can be used on a scale pan to weigh any integral number of pounds from 1 to 40 inclusive, if the weights can be placed in either of the scale pans. The answer is four: 1, 3, 9, and 27 pounds.