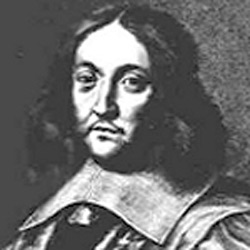 Pierre de Fermat was a French lawyer, magistrate, and gentleman scholar, often called the Prince of Amateurs, who is best known for the conjecture, now proved, known as Fermat's last theorem. Although employed as a senior government official, Fermat somehow managed to find time to do an astonishing amount math, for which he sought little acclaim or acknowledgement. In fact, he published only one important manuscript in his entire lifetime and even then used fake initials. When Roberval offered to edit and publish some of his works, Fermat replied "whatever of my works is judged worthy of publication, I do not want my name to appear there." Most of his results are known through letters to friends, notes in book margins, and challenges to other mathematicians to find proofs for theorems he had devised.

Fermat was one of the founders, with René Decartes, of algebraic geometry, and, with Blaise Pascal, of probability theory. His work on the maxima and minima of curves and tangents to them was seen, by Isaac Newton, as a starting point for calculus. Yet his greatest love was for number theory. In 1640, while studying perfect numbers, Fermat wrote to Mersenne that if p is a prime number, then 2p divides 2p - 2. Shortly after he expanded this into what is now called Fermat's little theorem. As usual, Fermat stated "I would send you a proof, if I did not fear its being too long." His most famous statement of this form accompanied his hasty notes on the "Last Theorem."

A challenge for many long ages
Had baffled the savants and sages.
Yet at last came the light:
Seems old Fermat was right–
To the margin add 200 pages.
–Paul Chernoff

Fermat's last theorem is a conjecture put forward by Fermat in 1637 in the form of a note scribbled in the margin of his copy of the ancient Greek text Arithmetica by Diophantus. The note was found after his death, and the original is now lost. However, a copy was included in the appendix to a book published by Fermat's son. Fermat's note read:

Fermat claimed that the Diophantine equation xn + yn = zn has no integer solutions for n > 2. It turns out he was right. But the proof had to wait 350 years and involved such advanced techniques, virtually none of which existed in the 17th century, that it seems very unlikely that Fermat really had found an elementary proof.

Fermat's last theorem – now truly a theorem – was finally proved correct by Andrew Wiles in 1994.1 In order to reach that dizzy height, however, Wiles had to draw on and extend several ideas at the core of modern mathematics. In particular, he tackled the Shimura-Taniyama-Weil conjecture, which provides links between the branches of mathematics known as algebraic geometry and complex analysis. This conjecture dates back to 1955, when it was published in Japanese as a research problem by the late Yutaka Taniyama. Goro Shimura of Princeton and Andre Weil of the Institute for Advanced Study provided key insights in formulating the conjecture, which proposes a special kind of equivalence between the mathematics of objects called elliptic curves and the mathematics of certain motions in space. Interestingly, the Wiles proof of Fermat's last theorem was a by-product of his deep inroads into proving the Shimura-Taniyama-Weil conjecture. Now, the Wiles effort could help point the way to a general theory of three-variable Diophantine equations. Historically, mathematicians have always had to state and solve such problems on a case-by-case basis. An overarching theory would represent a tremendous advance.

Fermat's little theorem states that If p is a prime number then for any number a, (ap - a) must be divisible by p. This theorem is useful for testing if a number is not prime, though it can't tell if a number is prime. As mentioned above, Fermat didn't himself provide a proof. Leonhard Euler was the first to publish a proof in 1736, but Gottfried Leibniz left virtually the same proof in an unpublished manuscript from sometime before 1683.