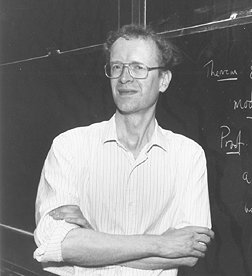 Andrew Wiles is an English mathematician who, in 1994, finally proved Fermat's Last Theorem. Even as a child, Wiles had been fascinated with number theory and, in particular, the conjectured last theorem of Fermat. Wiles studied at Oxford (BA 1974) and Cambridge (PhD 1977) and has held posts at Cambridge, Oxford, and Princeton.

From the mid-1980s his work was focused on proving a proposition known as the Shimura-Taniyama conjecture, since from this, it had been shown, Fermat's Last Theorem would follow. In 1993 he gave a series of lectures at Cambridge University ending on June 23, 1993. At the end of the final lecture he announced he had a proof of Fermat's last theorem. However, when the results were written up for publication, a subtle error was found. Wiles worked hard for about a year, helped in particular by a colleague, R. Taylor, and by September 19, 1994, having almost given up, he decided to have one last try. As he recalled: "... suddenly, totally unexpectedly, I had this incredible revelation. It was the most important moment of my working life... [I]t was so indescribably beautiful, it was so simple and so elegant ... [that] I just stared in disbelief for twenty minutes, then during the day I walked round the department. I'd keep coming back to my desk to see it was still there – it was still there."