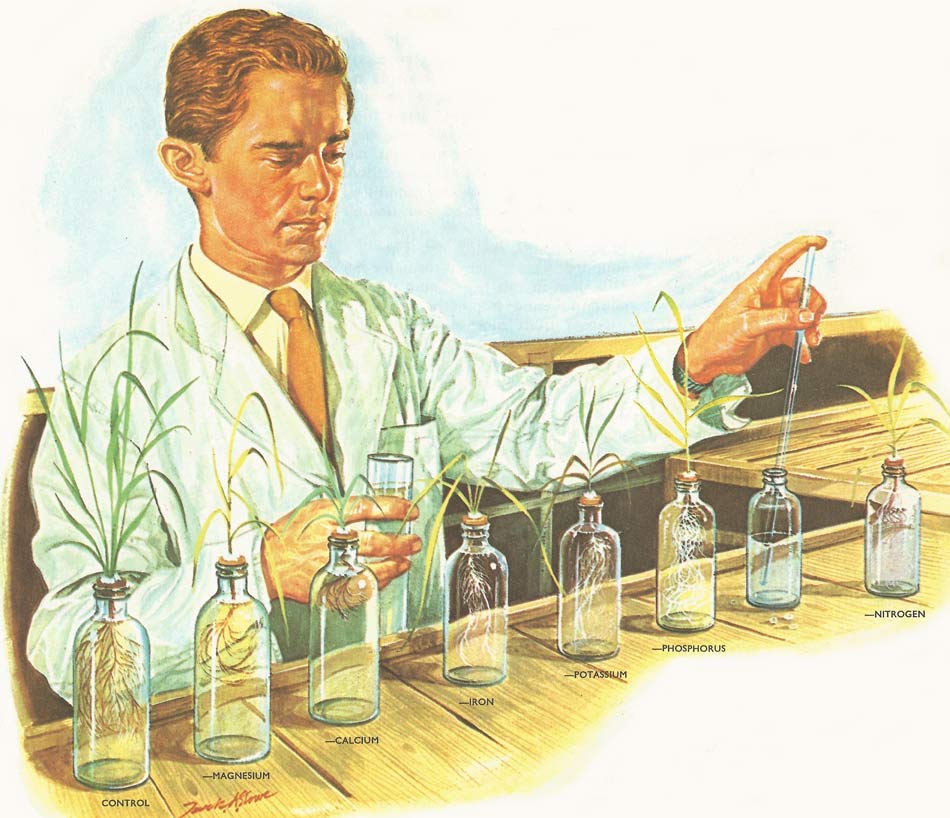 A water culture experiment. A series of flasks with seedlings growing in them. One flask contains all the elements necessary for healthy growth, the others each lack one different essential element and the plants in them show obvious signs of ill-health. Each flask contains the trace elements. 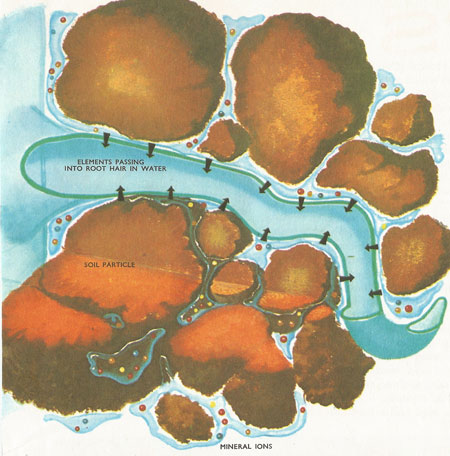 A diagram of a highly magnified root hair cell showing its relation with the soil particles. These may have a covering film of water over their surfaces. The elements are shown as ions in solution in the soil water and passing into the root hair. 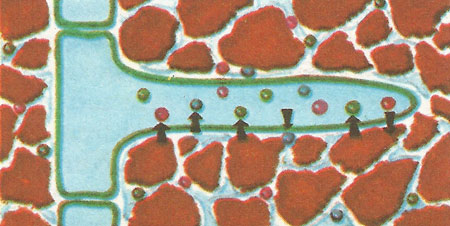 When the ions of some elements (e.g. calcium, potassium, magnesium) enter the root hair in solution from the soil the ions of one or more elements may pass out in exchange to help maintain the correct proportions of ions with positive and negative charges in the root hair.

Every gardener knows that plants will not grow well unless they are supplied with certain substances. Thus potash (which contains potassium) is a valuable 'food' for crops such as potatoes and for good fruit production. Plants which grow in soils that are short of phosphorus grow slowly and their leaves are often tinged with red. Clover, too, does not grow well in phosphorus-deficient grassland. By adding nitrogen to the soil in the form of nitrates, plant growth may be greatly increased and the yellowish leaves become dark green (providing no other necessary element is missing).

If a plant is burnt and the ash that remains is analyzed it will be found to contain several other elements, namely iron, magnesium, aluminium, calcium, potassium, sodium, silicon, phosphorus, sulfur and chlorine. The portions of these vary considerably and not all of them are essential for the healthy growth of the plant. For example, though sodium and chlorine are present in considerable quantities they have not been shown to be essential. The ones that are essential can be shown by growing the plants in special water cultures. Plants are grown in jars containing carefully balanced quantities of certain salts dissolved in water. Some of the jars contain all of the necessary elements and each of the others lacks one different element. The plants supplied with all the elements grow healthily, while some of the others appear yellow or stunted, showing that the elements missing from these jars are necessary for healthy growth. Six elements are essential in relatively large amounts besides carbon, hydrogen, oxygen and nitrogen. These are calcium, iron, magnesium, phosphorus, potassium and sulphur. Other substances are also needed, but only in the minutest quantities. These are the so-called trace elements – manganese, boron, zinc, copper and in some plants, molybdenum. They are supplied in the water cultures, for the salts used in this experiment usually contain them as impurities.

Apart from most of the carbon and oxygen, the plant absorbs the elements it requires in solution from the reservoir of minerals in the soil. Usually these are not present as molecules but as ions in solution in the soil water. Each soil particle holds a thin film of water round it. This film contains ions which are also present in decaying material (humus) and also in any water which lies freely in the soil (i.e. not attached to soil particles).

Though the minerals enter the root hairs, in solution, there is no relationship between the quantities of mineral taken in. Water passes into the root cells by osmosis, but exactly how minerals pass into the root is at present not clear. The rate at which they are taken up from the soil may vary considerably. Some elements enter the root much more easily than others. Also their concentration in the root may be much higher than those in the soil so that the work has to be done (i.e. energy expended) to obtain them. The energy for the uptake of minerals comes from respiration (i.e. the 'food-burning processes' which take place in the cells of the root). The 'fuel' consumed, in respiration is usually a sugar or similar compound, and this will either have been formed in the plant's food-building processes (photosynthesis) in the leaves or formed from one of the product of photosynthesis. Respiration usually requires oxygen, and so it is important that the soil round the roots has plenty of air spaces in it to allow oxygen to pass into it from the atmosphere.

After the minerals have entered the root hair they will pass from cell to cell. Some may be used up by the growing cells of the root, the remainder will reach the water-conducting cells in the center of the root and will be carried to the upper parts of the plant in the stream of water (transpiration stream) being pulled upwards to replace that evaporated from the leaves by the Sun. Any cells near the water-conducting channels will be able to build up a 'stock' of minerals very quickly (if chemical reactions are proceeding rapidly in them).

Most of our knowledge of the minerals that a plant requires, and the deficiency diseases caused by their absence, has come from water culture and other experiments in the laboratory. However, we have also discovered many facts from farming. The failure of crops to grow in certain areas due to the absence of some elements from the soil, and the gradual fall in the yield due to farming over-extensively and thus exhausting the soil, are two examples.

In former times farmers employed a system of crop rotation whereby they left a field fallow for a year, having grown crops on it for a few years previously. This meant that each year large areas of land were producing nothing. The modern practice is to apply fertilizers that contain particularly the elements that are most likely to be exhausted quickly. Generally these are potassium, phosphorus and nitrogen. In some parts of the world lack of trace elements has seriously affected the growth of fruit trees and crops. Orange trees in California suffer naturally from a lack of zinc, and 'grey speck' of oats, particularly prevalent in fen country, is due to manganese deficiency. Many of the crops grown on land reclaimed from the sea in Holland suffered from copper deficiency.


The importance of ions

One important factor in determining the ease with which elements enter the plant is the size of the ions of these elements. In a watery solution each ion obtains a 'coating' of water (each is said to be hydrated). The larger hydrated ions pass less easily into the root. Sodium, for example, does not enter the root so rapidly as potassium. The rate at which various ions enter will also depend on their concentration in the soil and on the proportions of other ions present.

The water culture experiments reveal that when some elements are absent from a plant's 'diet' the growth of the plant is seriously affected.

Nitrogen is of utmost importance. It may account for as much as 4% of the plant's dry weight (i.e. its weight minus that of the water it contains). The majority of plants rely on the nitrogen in the soil for their supply and it is absorbed by the roots in the form of nitrate or in the ammonium part of an ammonium salt. The nitrogen absorbed is rapidly used up and is eventually built up into the complicated molecules called amino acids and proteins. These form the main part of the plant's protoplasm (proteins and amino acids are compounds whose molecules contain carbon, hydrogen, oxygen and nitrogen atoms and sometimes sulphur atoms as well). If nitrogen is lacking from the plant's diet it is unable to build up amino acids or proteins, since the latter are formed by the joining together of amino acid molecules. A seedling will never reach a very large size - it will be able to grow for a time using the stores of nitrogen in the seed - and will eventually die.

Magnesium is an essential part of the chlorophyll molecule. If it is lacking no chlorophyll can be formed, although the plant will be able to grow using the food stored in the seed. It will lack any green pigment (a condition called chlorosis) and it will produce seeds of a poor quality and which are few in number.

Though iron is not itself part of the chlorophyll molecule it is necessary for the formation of chlorophyll. Lack of iron causes the young leaves of the seedling to appear a creamy white due to the absence of the chemical reactions within the living cells of the plant.

The exact role of potassium in the plant is not known and the results of its deficiency vary considerably as the amounts of other elements vary. If ample supplies of nitrogen and phosphorus are present new growth is not usually slowed down by the absence of potassium, but the older parts (particularly the leaves) tend to become yellow and die. This affects the plant's food-making capabilities and fruit and seed production are seriously interfered with.

Phosphorus plays a vital role in the plant's chemistry. It forms part of the complicated protein molecules in the cell nuclei and it is present in fatty substances and combined with sugar molecules. Many of these phosphate-containing molecules are important because energy for use in respiration and other processes is released when these molecules split. The leaves of plants unable to obtain sufficient phosphorus die off rapidly and the mature plant ripens very slowly. Growth in general is slowed down considerably.

Sulfur is a constituent of many amino acids and proteins. Lack of it produces stunted growth and the color of the plant is pale.

If calcium is lacking, growth is stunted and the quantity of chlorophyll in the leaves is lowered. Growth of the root and shoot of the seedling are soon brought to a halt. Calcium acts as building material, for it is present in calcium pectate which acts as a cementing substance, binding together the cell walls of adjacent cells.

The exact role of the trace elements is not well understood at the present time, but when they are absent from a plant's diet they may cause serious diseases. It would seem that some trace elements must be present in the cells to enable enzymes to perform their everyday tasks of piecing molecules together or splitting them. Others appear to be an essential part of the enzyme molecules. Boron is necessary in order that the plant can obtain and use calcium in an efficient way. Plants, such as clover, have swellings on their roots in which bacteria live. The bacteria are able to convert nitrogen gas from the atmosphere into nitrates. This process requires the element molybdenum and is unable to take place in its absence. Manganese occurs in at least one enzyme and its presence is needed for certain other enzymes to work. Zinc has a similar role with the same enzymes. Copper, like iron, may be necessary for the formation of chlorophyll and is essential to some enzymes that oxidize (add oxygen to) the substances in the living cells.