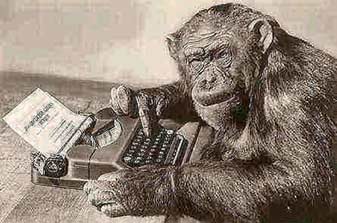 Six monkeys pounding away on typewriters would, by pure chance, if given enough time, be bound to write out all the works held in the British Library (or in all other libraries, for that matter). This idea was first suggested by the biologist Julian Huxley (1887–1975), discussed by the physicist James Jeans in his Mysterious Universe (1930), and has been restated in various forms over the years, in terms of chimpanzees, Shakespeare's sonnets, and such like. It was also the subject of Russell Maloney's short story "Inflexible Logic," first published in The New Yorker magazine (1940) and reprinted in Clifton Fadiman's Fantasia Mathematica,1 which tells the tragic tale of what happens when the fantastically improbable comes true.

1. Fadiman, Clifton. Fantasia Mathematica: Being a set of stories, together with a group of oddments and diversions, all drawn from the universe of mathematics. New York: Simon and Schuster, 1958.