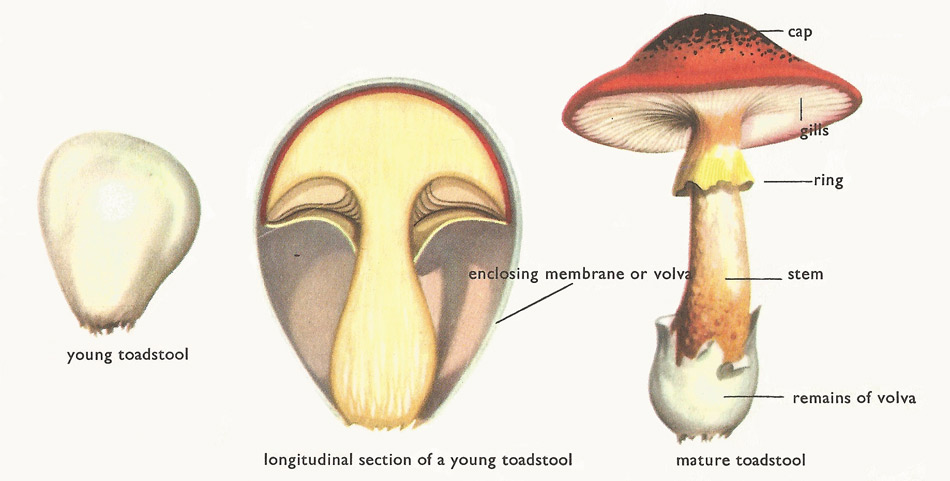 Fig 1. Development and anatomy of a toadstool shown diagrammatically. 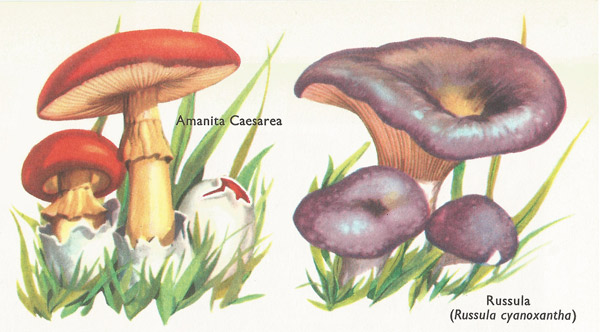 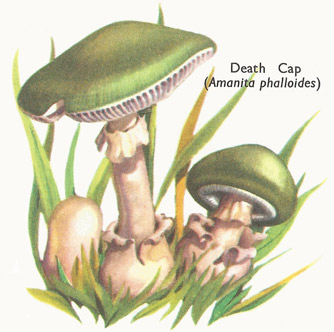 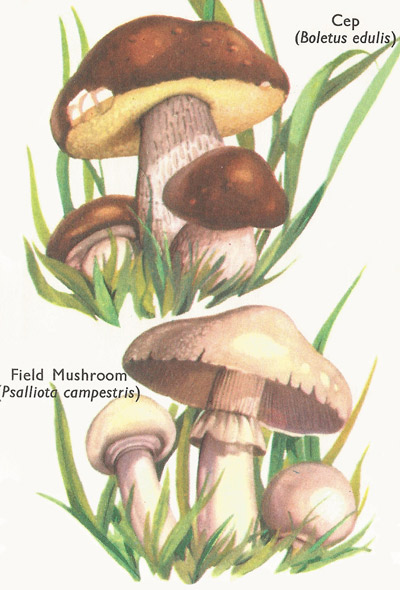 Fig 6. How toadstools reproduce themselves.

The fungi are a division of the plant kingdom, and mushrooms and toadstools are the reproductive or fruiting bodies that some of them (but by no means all) produce.

The plant body of a fungus consists of a tangled mass of threads called hyphae, the whole mass being called a mycelium. In the case of the mushroom this is underground in the soil.

Fungi differ markedly from almost all other plants in being devoid of chlorophyll, the green compound that enables plants to build up their food from simple chemical substances. They therefore feed on plant or animal matter, alive or dead. If they feed on living organisms they are said to be parasitic; if on dead matter they are called saprophytic. Most fungi that produce mushrooms and toadstools are saprophytic, getting their nourishment from leaf-mold and similar substances.

Most of us can recognise one or two kinds of mushroom and regard all 'toadstools' as poisonous. In fact, some toadstools are perfectly good and safe to eat. Mushrooms grow in fields; you will find toadstools most numerous in damp woods in the late summer and autumn. As we have said, a number of the fungi that we call toadstools are edible, in addition to the two common species of mushroom, the Field Mushroom (Psalliota campestris) and the larger Horse Mushroom (Psalliota arvensis).

Those illustrated here are: Cep (Boletus edulis). Not a very attractive fungus to look at but one that is excellent to eat. It is found in woods, especially beech-woods (Fig 5).

Amanita caesarea. A European species, highly thought of on the Continent but not found in Britain (Fig 3).

Russula (Russula cyanoxantha). The color of the cap varies from purple to greenish (Fig 3).

Field Mushroom (Psalliota campestris). This and its larger relative the Horse Mushroom grow in fields. The gills change with age from pale pink to a blackish color. Be careful if you eat any fungus other than mushrooms. Some toadstools are so poisonous that the doctor may not be able to save your life if you eat them. Such time-honoured tests at that of a silver spoon turning black, if put in the juice while the toadstool is cooking, is quite useless Figure 5).

Death Cap (Amanita phalloides). This is a common fungus and one of the most dangerous; numerous deaths have been caused by it. It grows in woods, has a greenish cap, white gills, and a cup-like volva at the base of the stem. Its great danger is that a careless person can mistake it for a mushroom. The symptoms of poisoning (severe abdominal pain) are not felt until ten to twelve hours after eating (Fig 4).

Fool's Mushroom (Amanita verna). Just as poisonous as the Death Cap and even more like a mushroom because the cap (as well as the gills) is white. Fortunately it is rare (Fig 2).

Fly Agaric (Amanita muscaria). This beautiful and unmistakable toadstool seldom causes death, but eating it results in intoxication and mental disturbance. Some primitive tribes deliberately eat it for this reason. Broken up in milk, it can be used as a bait to kill flies (Fig 2).

Devil's Boletus (Boletus satanas). This strangely colored fungus belongs to the same genus as the Cep and, like it, grows in woods. It is very unwholesome but is not regarded as dangerously poisonous (Fig 2).

Sickener (Russula emetica). A Russula not unlike the one illustrated, but the cap is red. It has an acrid taste and causes nausea and sickness if eaten (Fig 3).


other kinds of fungus

We have mentioned that only some of the fungi produce mushrooms and toadstools. Other kinds include such varied forms as moulds and mildews, yeasts, and parasitic types which produce disease in plants and animals. The most famous of the moulds is Penicillium, from which the wonderful antibiotic drug penicillin is produced. Yeast is the valuable fungus which we use to promote fermentation in making beer and wine and in making bread rise. Examples of fungi that cause disease in plants are wheat rust, which can seriously damage cereal crops, and potato blight, the cause of the Irish famine of 1846–47. Ringworm, a skin disease of animals and humans, is caused by a fungus.


development and anatomy of a toadstool

The greater part of the toadstool is made up of the cap and the stem (Fig 1).

The stem supports the cap and may be long and slender or thick and rounded, according to the species. The surface of the cap may be moist and sticky or covered by a dry skin. The young toadstool has a membrane stretched from the edge of the cap to the stem, covering the gills. As growth proceeds, this is torn and remains as a ring round the stem. Some kinds have a second membrane, the volva, which encloses the whole of the young toadstool; this is also torn when growth is complete.


How toadstools reproduce themselves

The reproduction of fungi is quite different from that of the flowering plants, in which the ovules are fertilized by pollen grain and seeds are produced (Fig 6). On the underside of the cap of the toadstool tiny spores develop. They are like fine grains of dust, much smaller than any seeds, and a single toadstool produces millions of them.

If they fall on suitable ground the spores germinate.

They grow into a filament called the primary mycelium, consisting of a chain of cells set end to end.

The filaments send out branches and also join and fuse together and the secondary mycelium is formed.

The mycelium forms a network under the ground and later grows up to form a new toadstool (the thickness of the threads is exaggerated in the picture).