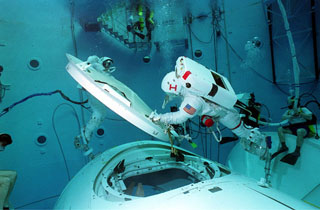 The Neutral Buoyancy Simulator (NBS) is a 5.3-million-liter water tank at the Marshall Space Flight Center, Huntsville, Alabama, that enables astronauts to train for extravehicular activities in conditions that simulate weightlessness. The astronaut is submerged fully-suited with weights attached to maintain a stable position in the water. Floating at a predetermined depth, the experience is similar to that of floating in space. Professional divers with scuba gear are in attendance.

The Neutral Buoyancy Simulator was built in 1955 by the US Army at the Redstone Arsenal. Engineers and designers, as well as astronauts, used it for the various phases of research needed to gain first hand knowledge of design and operation problems connected with working in a zero-gravity environment. Because of this unique capability, the NBS contributed significantly to the American manned space program especially Projects Gemini, Apollo, Skylab, and the Space Shuttle. Until the mid-1970s, when an additional facility was constructed at the Johnson Space Flight Center to support the Space Shuttle Program, the NBS was the only test facility that allowed astronauts to become familiar with the dynamics of body motion under weightless conditions.

The NBS is in Building 4705 at the Marshall Space Flight Center and is 75 ft in diameter and 40 ft deep. The water within the simulator is temperature controlled, continuously recirculated, and filtered. There are four observation levels with portholes to view activities inside. An elevator serves all four observation levels. Special systems are integrated into the tank for underwater audio and video, pressure-suit environmental control, and emergency rescue and treatment. Life support is simultaneously provided by these systems for up to four pressure-suited subjects. Other systems include data acquisition and recording, underwater lighting, special underwater pneumatic and electrical power operations of motor, valves, controls, and indicators that are required for high fidelity, and functional engineering mock-ups and trainers. Adjacent to the NBS is a completely equipped test control area for directing, controlling, and monitoring simulation activities in the simulator. An annex contains the operating crew dressing and shower area.