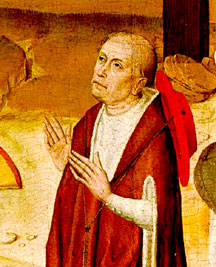 Nicholas of Cusa, also known as Nikolaus Krebs, was a German theologian best known for his advanced cosmological views. He held that the Earth rotates on its axis, that space is infinite, and that the Sun is a star like other stars. He also suggested the use of concave lenses for the shortsighted.

In his De docta ignorantia, Nicholas of Cusa endorsed the idea of other inhabited worlds:

Life, as it exists on Earth, in the form of men, animals and plants, is to be found, let us suppose, in a higher form in the solar and stellar regions... Of the inhabitants then of worlds other than our own we can know less, having no standards by which to appraise them. It may be conjectured that in the Sun there exist solar beings, bright and enlightened denizens, and by nature, more spiritual than such as may inhabit the Moon - who are possibly lunatics ...

He therefore went much further than those scholastics of the thirteenth and fourteenth centuries, including William of Ockham, Jean Buridan, and William Vorilong, who merely asserted that it would have been possible for God to have created other worlds should he have chosen to do so. Considering the fate of another Middle Age cleric, Giordano Bruno, who expounded pluralism, it might be assumed that Nicholas would have seriously upset the Church with his views. In fact, however, he went on to become a Catholic cardinal.