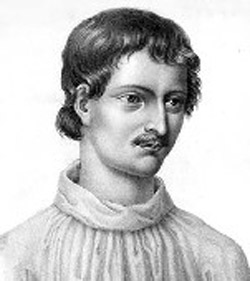 Giordano Bruno was an Italian scholastic and pantheist philosopher, poet, and lapsed Dominican monk who had a dangerous passion for unorthodox cosmological beliefs. In his books, such as De l'infinito universo e mondi ("'On the Infinite Universe and Worlds"), published in 1584, he expounds the doctrine of pluralism without restraint:

Drawing upon such sources as Lucretius, Nicholas of Cusa, and Copernicus, he went further than any of these and populated not only planets and stars, including all the other worlds of the solar system, but also attributed souls to every object in the heavens and even to the universe as a whole. Contrary to later popular belief, he was not burned at the stake in Rome principally for his cosmological views but rather for his denial of Christ's divinity. Even so, his fate served, temporarily at least, to limit the speculative inclinations of others and he has become renowned as a martyr to science.